What’s a Vapor Barrier and Why Do You Need One? 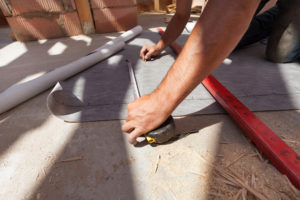 Home ownership rates have been inching downward since about 2005 until recently.

Data from the U.S. Census Bureau show that rates started trending upward in about a decade during 2016.

With more people owning homes, a large number of owners are getting into home ownership for the first time. About a third of all sales in 2018 were to first-time homebuyers. And many for the first time are discovering crawl spaces.

The beloved world between the worlds for homes come with some quirks; most importantly, a vapor barrier.

Here’s what it is, why you needed it and how to make sure it’s working for you.

What Is a Vapor Barrier?

A vapor barrier is a material that is used to reduce or prevent water vapor from impacting a structure.

In the context of most people’s homes, these are large usually large plastic sheets that cover the dirt floor of crawl spaces. In many cases, thick ply vapor barriers exist in several pieces rather than one giant vapor barrier. Often, vapor barriers bust be laid around support beams.

Why Do I Need One?

In a previous age, it was thought that a house needed to breathe and have a continuous flow of air around the house to keep its structure dry. But to keep to much water vapor from the earth percolating up into the crawlspace people put down large plastic sheets to protect floor and band joists from moisture-related damage and burying critters.

Today, we don’t have open vents. But we keep the vapor barrier to prevent moisture from the earth from causing mold, mildew, and rot on wooden structures.

Properly installed they can prevent burrowing insects such as termites and ants from inviting themselves over to your house for lunch.

How to Make Sure It’s Working for Me

First, get ready for a house crawl: literally. Get on your work clothes and crawl around to inspect your vapor barrier. Is it ripped at all? Is there any exposed earth? Is there moisture pooling on the barrier? If you answer yes to any of these, you need to do something to fix it.

Also, inspect other fixtures for damage. Look at metal fixtures such as HVAC ductwork, plumbing or fasteners and check for rust or corrosion. If you see any, you also need to act.

This means that enough water vapor is seeping into your crawlspace to do some damage.

Are You In a Desert?

If not, you probably live in an area where a vapor barrier is a must for your home.

Living in a place where water is plentiful has so many ups: beautiful foliage, April showers and streams and lakes. All that water has its place. Your crawlspace is not one of those places.